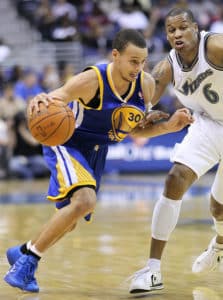 At the center of our small town is Davidson College, which is renowned for its championship-winning sports teams. The Division I Men’s Basketball Team is a historically winning team and is leading their current season with 4 wins to 1 loss. The Wildcats had a turning point in the 2008 – 09 season with an All-American player who pushed his team to great heights, even to a spot among the Elite 8 in the NCAA Basketball Tournament. If you’re an NBA fan you may have heard of an exceptional athlete, the famed Stephen Curry.

If you’ve seen him play in his new home in Oakland as a point guard for the Golden State Warriors you have been among those wondering, where did Stephen Curry go to college? Very few would guess that that it was, in fact, Davidson College – a small, liberal arts college in small-town North Carolina. A native of Charlotte, NC, Stephen Curry opted to stay close to his hometown for college and play for the basketball squad there.

He holds a number of career records for the Wildcats. In the  2008 – 09 season he led the nation in points-per-game, averaging a staggering 28.6 points. He was consensus first-time All-American, was named the Southern Conference Player of the Year. He also holds scoring records at the Davidson College for three-pointers, free throws, and 30 and 40-point games.

In 2009 Stephen Curry moved up the ranks from his spot leading the Davidson College Wildcats to the NBA draft, where he was drafted in the first round to the Golden State Warriors. He was the seventh overall pick and went on to be chosen as the runner-up for the Rookie of the Year Award at the end of that season. He was a First Time All-Rookie selection that year and went on be chosen as a member of the USA Men’s Basketball Senior National Team. He played again on the national team in 2014, winning two Gold Medals with them. That same year he started in the 2014 NBA All-Star Game.

Since his collegiate career, Stephen Curry has been a favorite for the headlines. The mix of his youthful, handsome looks, as well as his humble demeanor, make him a great spotlight character. His position in the media, as well as his community involvement, have equally left people wondering, where did Stephen Curry go to college? Since the beginning of his NBA career Curry has been involved in the United Nations Foundation’s Nothing But Nets campaign, through which he donates mosquito nets to protect families across Africa from malaria. His Three-For-Three Challenge last season was a huge success whereby he donated three mosquito nets for every three-point shot he made.

Stephen Curry’s career at Davidson College undoubtedly prepared him both athletically and communally for his successful career in the NBA. In the 2010 – 11 season he was the winner of the NBA Sportsmanship Award for his conduct both on and off the court. His Davidson College education continues to shine during his time in the spotlight, as he puts that liberal arts training to work. Every year he makes the pilgrimage back to his hometown to compete against the Charlotte Hornets — and event worth catching.

If you’re a big basketball fan and want to attend this memorable event, or if you’d like to take a tour of Davidson College, we’d love to host you here at the Davidson Village Inn! Our relaxing rooms and suites provide a place to rest and rejuvenate after a day of exploring Davidson and Lake Norman.

Ready to start planning your trip? Download our free Davidson Vacation Guide to see all the great things to do in Davidson!