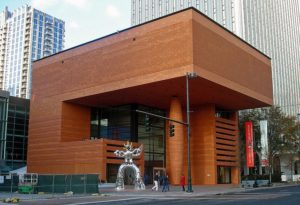 Bechtler Museum of Modern Art ? Photo By Akhenaton06 via Flickr

The Becthler Museum of Modern Art is one of the hottest new things to see in downtown Charlotte, NC. Centrally located it is an apparently inspired and inspiring, sculptural space. If you’re staying in the area with us at the Davidson Village Inn in this is a quick 30-minute drive from our accommodations in Davidson, NC. The museum would be a great stop during a day in the big city, and is a favorite pastime for many of our guests. Their unique collections are rewarding and influential to the museum’s many visitors.

Founded in 2010, the Bechtler Museum of Modern Art has architecture that is as arresting as the art collections in its midst. The Bechtler family of Switzerland had the featured, world-famous art collection, which was privately held in their homeland until the museum opened four years ago. Andreas Bechtler was an art enthusiast inspired by his parents’ love and knowledge of modern art. He made the family collection available for everyone to see after 70 years of its privacy, with only a few pieces ever shown publicly in the United States.

The Bechtler Museum of Modern Art was designed by famous Swiss architect Mario Botta to be simple yet awe-inspiring. It is a four-story structure with an open glass atrium at its core, which sheds natural light throughout the building. The terra cotta exterior accents an equally geometrical and flowing form. The fourth floor gallery is the most notable room, jutting out from the center of the building and looking out over the city.

This museum is home to the epitome of a modern collection featuring art from every major movement and school of the 20th century. Many of their featured artists are from European traditions, especially the Bechtler family’s fellow countrymen, accounting for the popular European Perspective collection. They also have many works of art that would be classified part of the School of Paris, which accounts for European pieces in the era following World War II. Besides their large European collections they also have a large collection of American and British Artists. The exciting thing about this being a mulch-generational family collection is that many of their non-Swiss art was collected through various personal relationships with artists, dealers and other collectors.

Current exhibitions running at the Bechtler Modern Museum of Art are just as exciting as their lasting collection. British Invasion is a current exhibit of English works reinforcing their Bechtler’s odd taste, and habit of collecting pieces that were personal pleasures, not mainstream. The Firebird exhibit, which is celebrating the presence of the Firebird sculpture which was stalled at Bechtler Plaza in 2009 and has become a downtown landmark. Calder: Twelve Works exposes some lesser-known works of this famous American artists.

The building of the Bechtler Modern Museum of Art is as much an art form as the art pieces it houses, and is a must-see for anyone remotely interested in art and design. You could wander its halls for hours mesmerized by the beautiful oddities of the Bechtler collection. We recommend this trip to any of our guests planning to spend time in downtown Charlotte. 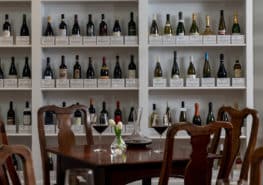